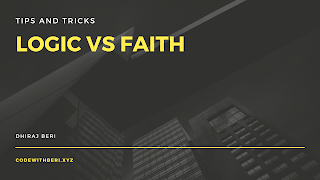 Faith vs. Logic is a topic that has been debated for centuries and will be debated forevermore. There are many different schools of thought on the subject, but what’s your stance? Are you someone who firmly believes in faith or logic? This blog post explores the pros and cons of both sides to help you decide which side of this great debate you’re on!

Logic is the process of using reason to arrive at a conclusion. It’s about analyzing information and data to see if it makes sense. If it doesn’t make sense, you discard it. Logic is all about facts and evidence. Faith, on the other hand, is based on belief instead of evidence. It’s about accepting something as true without proof. Faith can be based on personal experiences, religious teachings, or a feeling that something is true.

So which is better? Logic or Faith? Let’s take a look at the pros and cons of each side:

-Logic is rational and reasonable. It’s based on reason and evidence.

-Logic leads to knowledge and understanding.

-You don’t have absolute certainty when you use logic. You can never be 100% certain about anything because there is always a possibility that the outcome could be different next time or with other people. That’s why it isn’t 100%. It’s just based on the best evidence that we have right now.

-Logic can be hard to learn and sometimes it’s confusing.

-People can use logic to argue for anything, no matter how absurd it is.

-When you have faith, you accept things as true even if you don’t have proof. This can give you peace of mind and comfort because you know that it’s true for yourself even if there isn’t any proof.

-Faith can be an important coping strategy during times of crisis or suffering, as a way to make sense out of painful experiences or difficult situations.

-Some people view faith as the only road map we need in life. Faith can give people a sense of purpose and meaning in life.

-People can use faith to justify anything, no matter how cruel or evil it is.

-When you have faith, you don’t always question things or analyze information. This can lead to ignorance and closed-mindedness.

-Faith doesn’t always lead to knowledge or understanding. Sometimes it can be difficult to understand why something is true if there isn’t any evidence for it.

-When you have faith, you don’t always put your trust in things that are actually reliable and trustworthy. Faith sometimes leads people into danger because they’re following a belief system that isn’t based on reality.

So which is better? Logic or Faith? As you can see, there are pros and cons to both sides. In the end, it’s up to you to decide which side of this debate you’re on. If you prefer reason and evidence, then logic is the way to go. But if you prefer to accept things as true without proof, then faith is the better option. Whichever side you choose, make sure that it’s based on your own personal beliefs and not someone else’s. The most important thing is that you’re happy with your decision!